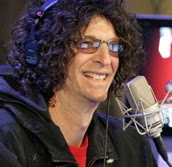 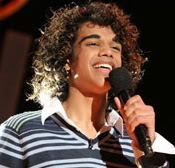 Ever since Howard Stern dropped off the pop culture radar screen when he took a huge lump of money and ran off to satellite radio, he's relied on a powerful PR company to keep his name in the news. Whether it's an engagement to his girlfriend (just in time, as her popularity is surpassing his), or cruelly sending out his besotted sidekick Artie Lange on a public Belushi-Farley death tour, Howard has become a silent gossip item who can't overcome the impression that he'll need to return to free radio in one form or another.

So now he's claiming to be influencing American Idol by promoting a website that urges people to vote for Sanjaya Malakar. And, with his powerful PR company, the claim that no one got to hear on the radio gets front page placement today in the New York Times!

"We're corrupting the entire thing," Mr. Stern said on his pay show Thursday, the day after Sanjaya secured a place in the top nine. "All of us are routing American Idol. It's so great. The No. 1 show in television and it's getting ruined."

Bullshit! Continue reading the article and you'll see that Howard's claims are refuted... while the stately New York Times supports Tabloid Baby's exclusive report that India is keeping Sanjaya in the contest!

Howard's claims that he influenced the voting are based on the fact that Sanjaya bounced out of the bottom three on March 19--but that was the day after his extraordinary, mind-blowing, crying girl performance of The Kinks' "You Really Got Me" (which has already made it onto Tabloid Baby's list of the Top 50 TV Moments of All Time).

And although it used Howard as the hook for its article, The Times gives a different analysis of the appeal of "Mr. Malakar, who at 17 looks like a 1970s pop star of the David Cassidy/Bobby Sherman/Andy Gibb variety... (and) is perhaps the most talked-about Idol contestant ever:

"A number of those voting for Mr. Malakar may be genuine fans, many of them in the pre- and early-teenage brackets, to judge from posts on a number of Internet bulletin boards dedicated to the show.

"But the fans also include older women and Indian-Americans, and Mr. Malakar's progress is being tracked voraciously by Indian newspapers in both the United States and India..."

A Fox spokeswoman dismissed Howard's claims, just as executive producer Nigel Lythgoe shrugged off the website last week. So why did The New York Times write an article that featured Howard Stern? Well, the LA Times was scandalized recently over an editor's romance with a woman who does PR for Brian Grazer. What's the Sirius-Times connection?
Posted by tabloidbaby at 3/31/2007 09:01:00 AM

If you bothered to listen to Howard's show, you would know that he is not claiming sole responsibility for Sanjaya's success. He talks about the support from India and others all the time. And your other claims about Howard and his purported efforts to get "publicity" are unfounded. How about reporting on some real news rather than pure fantasy resulting from ugly jealousy of a great entertainer.