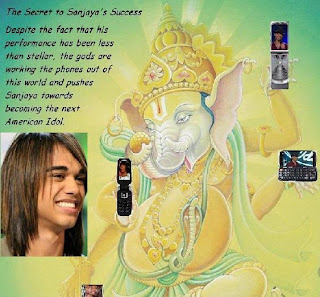 Surya Yamanchili, in his final hours as the most-recently fired Apprentice candidate, is the latest to weigh in on the worldwide debate over our report on suspicions that Sanjaya Malakar's stay on American Idol is being extended by bloc voting in India--specifically from workers and technology in outsourced call centers in cities like New Delhi.

Surya, like Sanjaya, is a hero to the Desi community because of his prominence on an American reality TV series (Indian-American couple Vipul and Arti Patel didn't make it past the first episode of last season's Amazing Race). He doesn't buy the theory.

"What the hell?" he writes us. "This seems pretty idiotic to me. There are no facts supporting it all-- just total speculation. Why don't they just speculate that Martians are voting for him because Martians consider themselves Asian?"

Hard-core rap fan Surya (who, like Sanjaya, was born in the USA) admits, "I haven't followed Idol. I think the fact that you can 'manufacture' a pop music star on national TV is proof what shit most pop music is today! Although I think if I watched the show, I'd probably like it!"

The story was based on a wave of Internet chatter on Indian and Desi blog and news sites. Since it's been picked up around the world, new suspicions and theories have emerged.

But the potential scandal has picked up even more traction and debate in the UK, where anti-Asian bias is more of a problem, and became a national scandal amid charges of racism on their Celebrity Big Brother.

All that was reflected in the comments when the story was posted on the widely-read, London-based Anorak site:

"He clearly is not talented enough to be in the finals... Clearly the Indians are pushing him through with the votes..."

"First off, your bunch of morons, India's time zone is different that when the show goes on, and the tech workers don't have tv's in the building. Why don't you all admit it, the kids got talent, your just pissed because the phones in your trailers didn't work when sundance was singing..."

"I am fairly certain the cheap labor at the Indian call centers probably don't have spare time to be spending company resources to vote on some kid across the ocean..."

"Believe it or not, Ms. Barba and Sanjaya have made this show so much more popular, for whatever reasons..."

"Huh? Who said anything about Indian call center workers-- and a different time zone? You only have to look in your own backyard... We initially brought them over as cheap labor for technical positions in US companies and since them they have been pouring in through H1B visas..."

"I believe Sanjaya is getting all his votes from the Indians..."

"Why can't the votes be limited to one per phone number? Wouldn't that be more valid? My own 13 year old stayed up and voted 100+ times for Blake. It's not just an ethnic thing. The little girls think he's cute."

Our family is insulted by your comments about Sanjaya gets his votes from India. We are American ,Caucasian,and didn't give a heck about Idol,until we saw and heard Sanjaya.WE fell in Love with him like Millions of American voters. At the concerts ,he had more fans than any one. We didn't fall for the negative campaign against him. WE all have a musical educational background.He has a beautiful voice,and quite an entertainer.