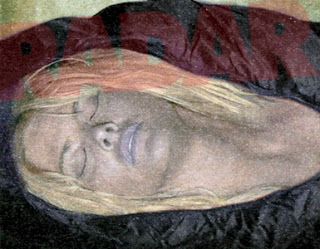 From Marilyn to JFK to Elvis to Diana, the celebrity post mortem photo has become a part of the historic record as well as tabloid tradition. So it was a surprise when the National Enquirer ran pictures of Anna Nicole Smith in her body bag-- then ran the disclaimer that they were "photo re-creations based on eyewitness accounts." They're usually better than that.

This morning, our pals at the New York Post's Page Six quote "a source close to the magazine" saying they're the real thing: actual photos of the Playboy icon's corpse in a Florida mortuary. They say someone with access to the refrigerated drawers scored a big payday after pulling out Smith's pre-embalmed body and unzipping the body bag for quick snaps of her bluish face. "We didn't want to get anyone fired," the Enquirer operative said. 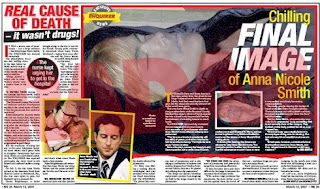 Would they hide a scoop like this? Stay tuned. 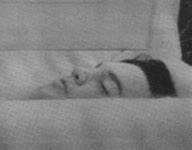 Yes a picture is worth a thousand words,This pic af anna,along with MANY more,has many fake labels to what she is doing.This camera is on a multiple shot setting,one frame anna was blikinking,and her eyes were obviously closed,but that dadnt stop another tabloid from rumoring that it was a picture of anna minutes after her death,Luckily our guys from TMZ Set the record straight by revealing all 4 pics in each frame.Anna was goofing around with her food,having a silly pic done for a friend.I feel bad for this girl,everyone is trying to cash in on her will she ever get ti R.I.P.?KW, Mn