Another chapter in the JFK conspiracy closes with today’s report that Woody Harrelson’s father has died in of “natural causes.” Charles Voyde Harrelson was a hired assassin, convicted of killing a federal judge. But he’s most notorious for declaring that he was involved in John F. Kennedy's assassination. That avowal came years after he was pegged as one of the three tramps photographed after being arrested on November 22, 1963, in a boxcar in the railyard near Dealey Plaza (the arresting officer claims that the three were released after a few hours of questioning).

The photographs that allegedly prove it are still being debated. Hunt is said to be the second man in line (at left). Ahead of him, Watergate figure Frank Sturgis. In back, Watergate figure E. Howard Hunt. Sturgis died in 1993. 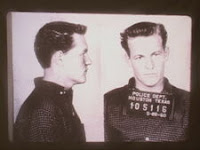 Harrelson was the last one. He was the only one who ever admitted his involvment in the killing of JFK. They wound up locking him away inside the maximum security federal prison in Colorado called "Supermax." That's where they say he died in his cell of an apparent heart attack. He was 69. 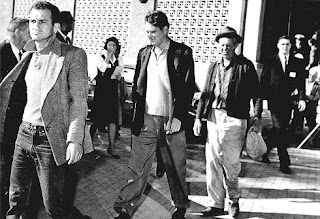 I believe the identification of the three tramps is Charles Harrelson, E.Howard Hunt, Chuck Rogers. I also have a feeling that Chuch Harrelson was the figure behind the picket fence wearing the railroad disguise. I certainly can't prove it but I have my suspicions. Harrelson would have been standing next to the assassin who did the head shot on JFK's temple. A disintegrating round blast through JFK's skull. It's possible that James Files or Lucian Sarte did the shot behind the fence. I believe that Rosco White was also back over there doing something he shouldn't have been doing also. I believe Beverly Oliver stated she saw Roscoe White up by the fence when she went up there and got chased away.

In continuim, I spose Harrelson could have been the sniper located in the storm sewer located in the front of the motorcade. A shot did find it's mark on the Kennedy Limousine front windshield. It would have taken an expert shot to have made this shot. I also believe that this frontal shot also found it's mark and entered the top of JFK's skull and made the grapefruit size exit hole out the back as the doctor's at parkland had all explained as seeing. The third time the limo driver(William Greer)turned around, you can see a bit of a flash in front of Greer. I believe this is the rifle round that came through the front windshield and hit JFK in the top of his head and exited out the back. I believe JFK received at the very least two head shots simultaneously.

The "tramps" are NOT the men you say they are. The information was declassified years ago, sorr to break it to you conspiracy kooks, but look it up!

I read really much worthwhile data in this post!