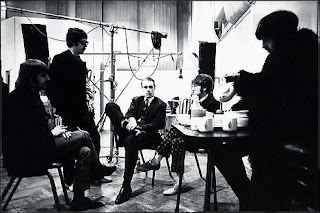 The Daily Mail has published this rare picture showing Paul McCartney wearing a pair of thick horn-rimmed specs while working with the Beatles on Sgt. Pepper's Lonely Hearts Club Band. The previously unpublished photograph is one of a rare set taken as The Beatles worked at Abbey Road studios in North London.

The Mail quotes McCartney's friends saying he rarely wore glasses because it was part of John Lennon's image.