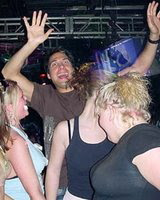 American Idol bad girl Antonella Barba has something to fall back on if she's ever voted off the show.

Sleazy Joe Francis and his Girls Gone Wild company are offering her a job as celebrity host in their video series. And they're putting $250,000 on the table.

The Girls Gone Wild DVDs feature college girls, strippers and other inebriated types peeling off their clothes and engaging in mild girl-on-girl action for the cameras--not unlike the photos of Antonella that hit the Internet and made her a star.

"There's a little Girls Gone Wild in every woman and this should be embraced as a positive, not a negative," Francis says in a press release today. "Why are people being ridiculed and punished for being sexual? It's ridiculous. Antonella Barba is an unbelievably sexy girl who obviously knows how to have a good time."

Hey, it's a quarter million dollars. Hugh Hefner didn't put up any money when he suggested last week that Antonella might appear in Playboy. And when Rosie O'Donnell waded into the controversy yesterday, she didn't offer Antonella a Disney cruise.

Antonella is set to sing on Idol tonight. Last night's show featured the male contestants revealing something we didn't know about them. We wonder what she's still got to hide.

Should Antonella Barba get voted off American Idol tonight, she can console herself by going wild with Joe Francis, according to TabloidBaby.

Francis offered her $250,000 to host the video series. More than Playboy. Francis says:

There's a little Girls Gone Wild in every woman and this should be embraced as a positive, not a negative.

really a nice blog with lot great content ..
Nice college galls free dating services http://tringuladating.com/ a dating services providing site where you can registered for free and can send the dating proposals.