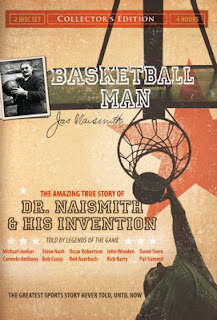 The nonfiction film about the life and legacy of the game’s inventor is being released today in a deluxe two-disc DVD set, and launched at a star-studded party in Kansas City.

Should you be in the downtown area, know that the b-ball bash tips off at 5 pm at The Kansas City Star Press Pavilion. The event is open to the public-- and it's free.

Basketball Man was produced by our pals at Frozen Pictures. It's already been hailed as "epic"... "superb"... and a "slam dunk."

The DVD set will be rolled out in select markets before its national release on May 8th.