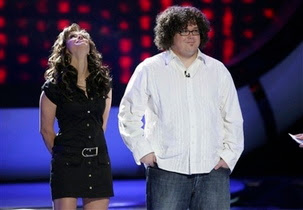 Jesus Christ! Who's to blame for Chris Sligh's elimination from the American Idol Top Ten?

That's how the Jeopardy! question would read. The out-of-breath doughboy with the mop of curls had a built-in constituency that should have trounced Sanjaya's Desi factor. But he never capitalized on or gave a signal to the widespread, Southern-based voting bloc-- and that could be because many had damned him for making it to Idol in the first place.

See, although Chris today claims he comes from "an indie, alternative-rock background," he's actually a product of the Christian music scene. And until recently, the Mark Volman lookalike (look it up), known to Idol fans as a jokester who went a wisecrack too far when he backsassed Simon Cowell (in the notorious "Il Divo and Teletubbies" incident), sang only the Lord's music. 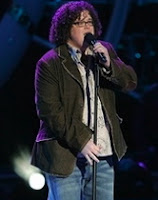 Though he cites Jesus (along with Adam Duritz) among his heroes on the Idol website, Chris never played up his Christian background. He's the son of Christian missionaries, spent much of his childhood overseas, attended the conservative fundamentalist Bob Jones University, and was a favorite of the influential Gospel Music Association.

He even participated in the GMA Music in The Rockies showcase back in 2002.

But though Chris currently performs as part of the Seacoast Church "praise band" in Greenville, South Carolina, he's been the target of backlash because he recently began performing mainstream (The Devil's) pop music. Jonathan Pait, spokesman for the Bob Jones school, even said publicly: "We really are somewhat disappointed with the direction he has gone musically."

Well, we and Idol voters were also disappointed with Chris' direction-- into bland pop music and apologies (to Simon, and for his singing-- and Chris should have known that Simon's suggestion to keep the glasses was revenge for the teletubbies crack). 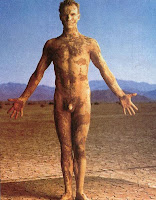 And let it be a lesson to future Idol contestants: Keep away from that satanic yogic lute-playing (and Studio 60 on The Sunset Strip guest star), Sting. Both Chris and Phil Bat Boy" Stacy sang boring Sting songs. Both wound up in the bottom three.

Now watch the producers slip Sanjaya the lyrics to "De Do Do Do De Da Da Da"...

(The GMA, by the way, says it recognizes three Christian Idol finalists as "keeping the faith alive": Jordin Sparks, Melinda Doolittle, and Phil.)
Posted by tabloidbaby at 3/29/2007 03:30:00 PM