So who's spreading lies about Michael Lohan?

Even the greatest gossip column in the world can get it wrong once in awhile. That’s what makes it gossip. And today’s item on Michael Lohan in the New York Post’s legendary Page Six is wrong wrong wrong…

So says Lohan friend and reality television producer Brett Hudson in Malibu, whose screams of outrage could be heard all the way to Sixth Avenue after he read this morning’s lead item, "Lohan's New Warning to Dad." The item, which spread like wildfire through the Internet, stated in part:

…Michael had hoped to patch things up with his daughter. But after talking to her dad, "Lindsay called her mother [Dina] and told her to be careful and to take care of her brother and sister," said our source…

“That is an absolute fabrication,” Hudson tells us. “And if it comes from a source, that source should be taken into an alley and forced to listen to Sanjaya until he or she learns how to tell the truth.

“Yes, there has been a conversation between Michael and his daughter, Lindsay. But the content and tenor of that conversation are drastically different from that which was reported in Page Six. Whoever fed them that information is a liar. A damnable liar. A fucking liar.” 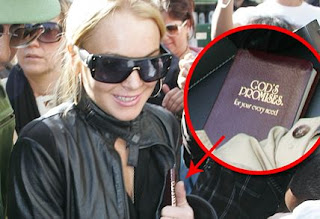 Michael Lohan was released from prison earlier this month, after serving nearly two years on drunk driving and probation violation charges. While in prison, Lohan took Bible study courses and is now working with the Teen Challenge ministry on Long Island. And Hudson and his team at Frozen Pictures are shooting a reality television series about his life and work.

“It seems that every time Michael has any contact with his daughter, someone is very threatened, and the publicity machine starts to churn out the propaganda,” says Hudson, who's finding a new career correcting inaccurate Lohan reports. “I’ve known Michael for three years. Before he went away, he said the truth would come out about who was lying about him. Well, these people are making it pretty obvious where and from whom the stories are coming from. Why would someone be threatened by a father's love for his daughter or a daughter's need for her dad? Who would be threatened? You do the math.”

So what was the conversation between Michael and Lindsay?