Heather Mills amputates her past 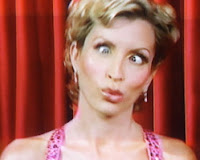 McCartney's name was never uttered. Whether that's due to lawyers' letters or part of the plan to present Heather as blank slate syndicated talk show candidate, the show's "first performer with an artificial limb" was presented as an odd celebrity without portfolio (and without the lower part of her left leg).

The familiar Heather only showed up between the lines: the way she twisted her face and talked out of the side of her mouth like Dick Cheney... her disingenuous claim that she was "not used to dressing up at this level" in her "ice cream sundae" gown-- followed by cohost Samantha Harris' quip, "Somebody get her some whipped cream" (obviously forgetting Heather's porny --NSFW-- photos)... and Heather's line to the judges: "Just don't ask me to point that foot! If you can point it, I'll give you a million dollars." After the McCartney settlement, she can afford to throw around a million bucks.

Not everyone bought into the new Heather. The Dancing with the Stars message boards were filled with anti-Heather postings:

"Is there anyone besides me who has a problem with a former call girl who posed nude in sexual situations now being called a 'charity campaigner' and hero for the disabled? Why would ABC put a person like this on a family show? Her nude shots (with a man) are available to anyone who can google, including my friend's older teenagers who were pulling up the pictures and laughing at them as she danced. In the UK she has a disabled parking badge. In the US she is dancing and doing high kicks."

"Judge her harshly? Are you crazy? She's being judged for being a gold digger and trying very hard to screw Sir Paul McCartney! Don't you read the news??? Jeez..."

"I, for one, am appalled that she is trying to make herself out to be something she's not right now. And I will not watch the show until she is OFF! Shame on ABC!!!!!!!!!!!!"

Thirty-nine year-old Heather and her partner wound up in the middle of the pack, placing seventh with eighteen points. The gambling site Bodog.com is among those taking bets on whether Heather's artificial leg will at one point fly off during the competition.
(See some of the NSFW photos from Heather's X-rated past here)
Posted by tabloidbaby at 3/20/2007 09:00:00 AM