Who needs call centers in India? Sanjaya Malakar's unexpectedly uninhibited and totally bizarre performance last night, aided by a deft director who kept cutting to a little girl who'd been weeping through the entire show (a tribute to the evening's British Invasion theme, of course) was one of the most memorable moments in American Idol history. And despite the best efforts of the judges to sway the votes, Sanjaya would seem to be a lock for a place in the Final 10, and upcoming Idol concert tour and album. (Too bad for Phil "Bat Boy" Stacey, who reminds us of a big kid from the Make A Wish Foundation.) 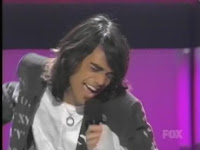 Sanjaya's explosion comes amid a furious refutation from one of the Indiacentric websites that led to our exclusive report about suspicions that Sanjaya's voting bloc was the Desi (South Asian) community here and outsourced call centers in India.

In the days after our report was picked up by media around world, Uberdesi writes:

"First off, AI cannot be broadcast LIVE in India. Everything is time-delayed... It is highly improbable for a TV to be present in a call center environment; do you watch reality programming when you are at your job? Even if there is a TV that did broadcast an American Channel, AI would be broadcast at the wee hours of the morning.

"The time difference would mean that the show should be available at approximately 6:30 / 7:30 AM for it to be live. But from Star World's online schedule it plays at 10 am on Thursday, which makes it 11:30 P.M. Central Time and at 8 P.M. on Wednesday, which would be 9:30 P.M Central Time Tuesday night This also happens to be the busiest time for call centers, considering the calls they have to make to the west coast.

"Think of all those telemarketing calls you receive every night when you sit down at the dinner table; if those cunning Indians were stuffing a virtual ballot box for someone who isn't even really one of their own, would they have time to annoy you?"