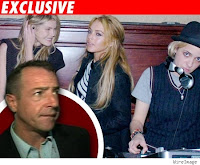 The website TMZ is running a story this afternoon, claiming “that Lindsay Lohan was so deeply concerned that her felon father (recently released from prison) would crash a party she was deejaying last night, that she had the club go to serious lengths to prevent him from showing up.”

Whether that side of the story is true or not, Michael Lohan’s camp says there was no reason to fear-- and claims the story's been trumped up to make him "look bad."

“That’s-- how can I say this nicely? That's bullshit,” said Brett Hudson, producer of the new Michael Lohan reality television series. “I was on the phone to Michael twice last night. He had no intention of showing up at any nightclub. That’s not the way he wants to reunite with his daughter. My God, the man just got out of prison. Give him a break!”

Michael Lohan was released from the Collins State Correctional Facility on Tuesday. While inside, he attended Bible college and became an Assemblies of God minister. He’s said he now wants to make amends, help others avoid this mistakes-- and reunite with his family.

Regarding Lindsay, he was quoted the night of his release saying: "I'm going to wait, and when she sees I'm walking the walk, I'm hopeful she'll open the door."

“I think Lindsay’s actions this week speak louder than bad tabloid reporting,” Hudson said, referring to her documented all-night antics in New York City, including a reckless chase in which she allegedly struck a paparazzo with her SUV. “There’s a lot of self-created drama around her. And what’s that girl doing in nightclubs to begin with? She just got out of rehab!

“I know where Lindsay’s father is," he said. “Where’s her mother?

Hudson is the uncle of actress Kate Hudson and has been on both sides of the tabloid fence, as a subject in his days with the Hudson Brothers, and as an award-winning producer in the 2005 revival of A Current Affair. “Before he went to prison, Michael had claimed he was the victim of the Hollywood machine," he told us this afternoon. “With this kind of story, I can see his point.”
Posted by tabloidbaby at 3/16/2007 04:03:00 PM