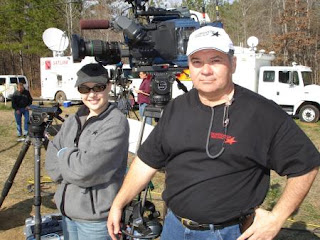 Rick Kaplan is the new captain of Katie Couric’s sinking evening news ship at CBS. His latest high-profile gig comes after a long career that could have seen an early end if not for legendary news cameraman Lewis Bailey of Bailey Mountain, Georgia.

“I saved Kaplan's ass early in his career,” says Lewis, who runs the incomparable Sharpshooter Worldwide, provider of professional video crews. It was 1977, in the early days of the Carter presidency:

“There was a large contingent of news folks in Plains, Georgia. The railroad depot had been headquarters for Jimmy Carter’s campaign, and Carter has just been elected, so the place was crazy. Billy Carter and Tom T. Hall were hanging out drinking at the Best Western in Americus-- the “Old Dogs and Children and Watermelon Wine” Tom T. Hall.

“We—CBS-- were The Big Dog on the porch. CBS had all the stuff in place and had been kicking shit out of the other news agencies because of the technology in place. We had a microwave antenna installed on the water tower in Plains, Georgia that went to MCI coax all the way to CBS headquarters in New York. In those days being live from Plains, Georgia was a big deal and the cost was great. The other networks were not live, but in those days CBS really was a working news organization and we had all the toys.

"Rick and Murray-- Martin Murray or Murray Martin-- I forget, but he was the technical management guy, hadn’t left for the motel when Carter’s handlers came out and said he had something to announce. I don’t remember what the exact announcement was. But Kaplan was in charge of the operation and Murray was screaming at him that Kaplan should have not good nighted the crew and that it was Kaplan's ass on the line!

"I fired up the terrestrial microwave and set all the levels and TD'ed the live hit. We made the live hit! Rick was the hero.” 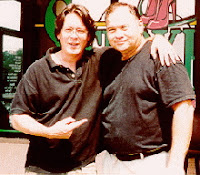 (Lewis also recalls working with Rome Hartman, the man Kaplan replaced at the CBS Evening News, when Hartman was stationed at CBS News' Atlanta bureau office "at Century Center next to I-85 Clairmont Road exit" in the 1980s. That's not Hartman pictured with Lewis at left.)
Posted by tabloidbaby at 3/09/2007 12:57:00 PM