"I'm the Osbourne with HIV!" 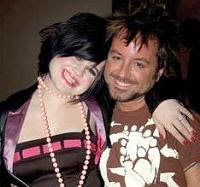 Jack Osbourne is not HIV-positive. The son of Ozzy and Sharon and reality TV star in his own right has been the target of speculation the past few weeks, ever since his sister Kelly broke down onstage at an AIDS benefit and blubbered that a "member of my family" is HIV positive-- "and I'm very proud of him."

It turns out that recovering drug abuser Jack was not the Osbourne Kelly had outed. The family member is not even a member of the TV family-- and not even an official "Osbourne," but, as we'd suggested, her cousin. Terry Longden is a 43-year-oldhairdresser and star of the UK reality show, The Salon. He'd attended the benefit with Kelly, and was standing offstage when she made the announcement in London. And he says he knew in advance that she'd make the disclosure.

"I told her to say whatever she wanted because it might help someone in a similar situation, but I didn't expect her to cry. I felt quite guilty. She gave me a big hug when she came off," Longden tells Inside Out Australia. 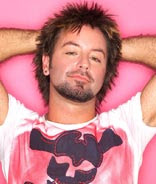 He says he found out he was ill after being tested six years ago, a case of "unfortunate" timing, as Ozzy's wife Sharon had just been diagnosed with colon cancer.

"I (eventually) spoke to Sharon and she was fantastic. She totally understood and gave her support. Five minutes later Ozzy rang and he was great, which was a relief. Then Aimee (the Osbournes' eldest daughter) called. She was a bit worried, but very supportive. Then I had dinner with Jack and Kelly the other day to tell them face to face. They were amazing. I couldn't have a better family."

LEONA KNIGHT
Am leona knight
Thanks to God and also to dr akhigbe , the great herbal man that cured me of HERPES. I contacted the virus from my partner 4 year ago, i almost spent all i had because i was restless , until i saw peoples testimony about Dr akhigbe recommendation online for how he has being curing HERPES with his herbs herbal medicine , and i emailed him and tell him my problem and he prepare my cure and send it to me through UPS and gave me instructions on how to use the herbs herbal medicine, i followed as i was instructed for 2weeks and behold after i finish drinking it i notice something in me, i went to the hospital for checkup and the result was negative and the virus was completely gone from my body. You can contact Dr akhigbe to get your herbs too and cure yourself from these virus. You can email him on drrealakhigbe@gmail.com or you call him and whatsapp him on +2348142454860. . Dr akhibge cure so many different type of diseases with his herbal herbs such as HERPES, HIV/AIDS. CANCER of all kind, DIABETES and so many more. I want to thank God for using Dr akhibge to cure me. He is real.

russell robertson...
There has been progress in herbal medicine of DR AKHIGBE which have become safer,in curing diseases;i was suffering and dying of herpes for past two years,untill i came across DR AKHIGBE on internet i email him on drrealakhigbe@gmail.com 'glory be to GOD'am cured of herpes by drinking his herbal medicine cure [HMC] he sent to me. Herbal medicine cure have made it possible curing diseases. i was once a victim and am giving out a living testimonies , and am been restore.
So become easier to take or drink and where early herbal often required drinking it as frequently as 3 to 5 times per day, most first-line cured, herbal medicine now comprise a single daily fixed taking as the instruction followed. DR AKHIGBE also cure others diseases like ; HIV/AIDS,DIABETES,CANCER,HERPES,SYPHILLIS,MENINGITES,GENITAL AND SIMPLEX HERPES, ALS,HEPATITES A AND B.etc any one out there been effected by diseases to email drrealakhigbe@gmail.com or whatApp him on +2348142454860. GET YOUR HERBAL AND GET YOUR FREEDOM.

Brothers and sister, let me use these opportunity to introduce a great doctor that cured ME FROM HIV/AIDS WITH HIS HERBAL MEDICINE. Dr Akhigbe, he is also know as the godfather of berbalism and all kind of root to cure different diseases.i meant his different testimonies on this blog site i also reach him through his email. first he encourage me with good advise, he told me to stop thinking on about the HIV and let my mind be free.secoundly he learnt me a short lesson that was very cleard to me and make me to understand that using condom when having sex is best protction. how ever,
The period of HIV infection to develop in the body is about three to four weeks. This period can, however, be longer up to 3 months and in rare cases up to 6 months. Most people generally develop detectable HIV antibodies by current method within 3 months of infection or to 6 months before it expand to years.Dr Akhigbe feel for patienas as his own sons and daughters he sent my herbal medicine through UPS express delivery and it took me 5 working days before i received it, he also instruction me on on how to use it. he is a good caring doctor he must write me each day to know if am following up with the herbal merdicine for good three weeks before he later order me to go to hoapitle for another test and i get a surprise result, that was how i get my freedom from the hand of hiv/aids.Dr Akhigbe also use his herbal medicine to cure diseases like HERPES ,HIV/AIDS , DIABETES , CANCER , ALS etc for his help please reach him through his email drrealakhigbe@gmail.com or whatapp him +2348142454860

If you have Herpes in your whole body such as fever blisters, hsv, or roofing shingles you know what it is like to stay with the pain and discomfort that herpes delivers. I don't need to tell you how awesome it would be to find something that works so well that you no longer need to fear about stress or outbreak,Dr Itua herbal medicine cure my herpes in two weeks of taking it.is genuine and natural herbal medicine it has no side effect, The reason I'm writing this is that I promised Dr Itua I will share his herbal work to the world to see Herpes is no more a big deal.also Dr Itua can as well cure the following diseases...HIV,Hsv 1/2,Hepatitis B,Cancer, Diabetes, Men/Woman Infertility, Scoliosis,Fibromyalgia,Fluoroquinolone Toxicity
Syndrome Fibrodysplasia Ossificans Progressiva.Fatal Familial Insomnia Facator V Leiden Mutation , Lottery Spell,Copd, Shingles,Fibroid, Fibromyalgia, Liver/Kidney Inflamotry, Epilepsy, Coeliac disease,Creutzfeldt–Jakob disease,Cerebral Amyloid Angiopathy, Ataxia,Arthritis,Amyotrophic Lateral Sclerosis,Alzheimer's disease,Adrenocortical carcinoma.Asthma,Allergic Asthma. Here His Contact...drituaherbalcenter@gmail.com/Whatsapp Phone.+2348149277976. I paid for his herbal medicine and sent it to me through Courier Service which I pick it urgently and used.

, WOW WHO WILL EVE BELIEVE THAT I WILL BE THIS HAPPY TODAY, AFTER MANY YEARS OF PAIN LIVING WITH HIV VIRUS. MY NAME IS STEPHEN LIVE IN UNITED KINGDOM. IT ALL HAPPEN FEW YEARS BACK WHEN I DISCOVERED THAT MY SYSTEM IS NO LONGER FUNCTIONING WELL, SO I DECIDED TO GO FOR MEDICAL CHECKUP ALL TO DISCOVERED THAT I HAVE BEEN LIVING WITH HIV POSITIVE VIRUS AND I NEVER NOTICE IT FOR A VERY LONG TIME. AT THIS PARTICULAR POINT OF TIME I WANTED TO GIVE UP MY LIFE, BUT WHEN I WENT THROUGH THE INTERNET TO READ MORE ABOUT HIV VIRUS, I FOUND OUT THAT THIS VIRUS IS DISGUSTING BOTH INTERNAL AND EXTERNAL. GOD SO HAVE IT THAT I HARD ABOUT THIS SIMPLE WONDERFUL AND GOD SENT HERBAL DR CALLED DR AKHIGBE THE SAME DAY I WANTED TO GIVE UP EVERYTHING BECAUSE I FEEL LIFE WAS NO LONGER IMPORTANT TO ME, MANY THINGS HAPPENED BUT TO CUT THE STORY SHORT, I AM HIV NEGATIVE NOW, AND EVER SINCE I WAS CURED THERE IS NO OUTBREAK EVERYTHING HAS GONE BACK TO NORMAL AND I BELIEVE AM THE HAPPIEST PERSON ON EARTH TODAY. DR AKHIGBE NEVER ASK ME TO TESTIFY FOR HIM, I DECIDED TO DO THIS MY WAY SO THAT AS MANY THAT WILL BELIEVE AND CONTACT HIM WILL BE FREE FROM THIS DEADLY DISEASE. THIS VIRUS IS SPREADING EVERYDAY SO LET PUT OUR HANDS TOGETHER TO SAVE LIFE. BUT I KNOW MANY ARE YET TO DISCOVERED THAT THEY ARE LIVING WITH THIS VIRUS. I BELIEVE THIS IS THE MOST CRITICAL VIRUS, YOU CAN LIVE WITH IT FOR MANY YEARS AND YOU WILL NEVER NOTICE IT. WELL AM SO HAPPY TODAY ESPECIALLY WHEN MY LOST LOVE IS BACK AND WE ARE GETTING MARRIED SOON. SO MY DEAR LADIES AND GENTLEMEN LET PUT OUR HANDS TOGETHER TO SAVE AS MANY WE CAN BY SHARING THIS TESTIMONY SO THAT THOSE THAT DONT HAVE THE OPPORTUNITY TO CURE THEIR DISEASE WILL BE CURED AND BE HAPPY FOREVER, SO YOU CAN CONTACT HIM THROUGH HIS EMAIL ADDRESS, WHATSAPP NUMBER AND WEBSITE AS FOLLOWED. drrealakhigbe@gmail.com +2348142454860. http:drrealakhigbe.weebly.com

HE CAN ALSO CURE THE FOLLOWING AND AM A LIVING TESTIMONY TO IT.
DIABETES
HIV
PREGNANCY PROBLEM
HERPES
ALS
CANCER

CONTACT HIM TODAY AND YOUR LIFE WILL NEVER REMAIN THE SAME AGAIN, AM PROUD OF YOU DR AKHIGBE