Just when American Idol's Antonella Barba scandal quiets down a bit, a Ghost of Topless Photos past pops up to accuse the show of All-American hypocrisy.

Frenchie Davis was a plus-sized African-American singer who got the boot in the 2003 season because she'd once been paid to pose topless for a website. She's suggested, and this morning protesters are declaring, that Antonella is being allowed to stay on the show because she's a white girl!

LA civil rights activist Najee Ali of Project Islamic H.O.P.E. is supposed to be leading a "Anti-American Idol Rally" outside the Kodak Theatre (site of the show's finale) right now.

Frenchie adds: "I couldn't help but notice the manner in which she was dealt with was the complete opposite of how I was dealt with... I'm certainly not interested in pissing people off, but this is an unfairness that can't be ignored." 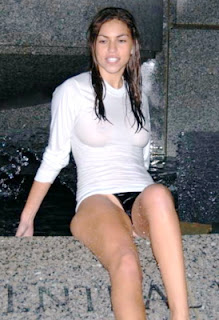 Now, as far as the official story goes, Antonella never posed professionally and was blindsided by the posting of her amateur shots and college girl-on-girl explorations.

She gained valuable sympathy from producers and the public when everyone agreed that she was not, as alleged, the woman in sex act photos (that is until someone comes up with the OJ-Bruno Magli shots showing Antonella wearing acrylic-- NSFW-- nails).

And it didn't hurt that Simon Cowell, Randy Jackson and Ryan Seacrest all confirmed support for Antonella while they were lounging with Hugh Hefner at the Playboy Mansion.

The only blip in the Antonella story this week has been the leaking of a few more shots (NSFW) of her stripping session on the National World War II Memorial, and some more squeaks about her siding with Hitler by desecrating the shrine. No kidding.

We'll keep you up to date on the rally...

Frenchie, by the way, is now on Broadway in Rent.

My name is Melonie, and I work at WagerWeb.com

We just released this article on American Idol and I thought you would find it interesting.

Have a nice day!

WagerWeb.com, one of the Internet's top gambling sites, is well-known for providing its customers with the best odds on everything from sports to entertainment to politics. And they've bolstered their offerings once again with the release of their American Idol final odds.

WagerWeb.com has listed young Jordin Sparks as the favorite to win American Idol at -400 odds. The 17-year-old from Glendale, Arizona has been at the top of our list for quite a while and her performances have continued to improve.

Stepping in to the role of underdog at WagerWeb.com is Blake Lewis at +250 odds. Lewis has survived the Idol cut a few times now by blaring out his original takes on classic songs, often infusing them with his beat-box stylings.

Lewis was an underdog to even make the final two, but somehow squeezed through. A runner-up finish would be disappointing for many of his fans, although it hasn't been detrimental to the careers of Clay Aiken and Katharine McPhee.

In a somewhat surprising result, Melinda Doolittle was dropped last week despite many observers considering her to be the best singer left in the competition. As past Idol seasons have shown the best singer doesn't always wear the crown, but Doolittle's career is likely only beginning.

About WagerWeb
WagerWeb.com founded in 1997, is a privately held, offshore online gaming company, fully licensed and located in San Jose, Costa Rica. With almost 10 years of experience, innovation and gaming technology, Wagerweb.com features a sportsbook, a racebook and casino and has accepted more than 50,000,000 wagers since the company's launch.