Ant & Dec are the next big thing? Wanna bet?

The networks and their production factories have made a mint importing game and reality shows from Europe, so why bother looking through headshots of washed-up comedians to host them? Despite the performances of Denise van Outen as Billy Bush's gurning, face-pulling second banana on Grease: You're The One That I Want, Éamonn Holmes' cancellation after a single episode on Fox, the prospect of the unlikeable though one-legged Heather Mills tomorrow night on Dancing with The Stars, and Craig Ferguson, ABC is importing a pair of tiny British TV stars to host the pilot of their much-heralded variety-gambling-game show hybrid, Wanna Bet-- the rip-off of the hit German series, Wetten Dass.... 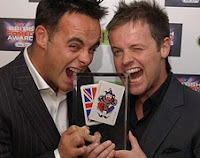 Ant & Dec, seen in the above clip punking their countryman Simon Cowell in an inside joke on the last round of American Idol auditions (they hosted the original UK version of the show, Pop Idol-- but we don't think Paula and Randy got it), are a peculiarly British taste, like Robbie Williams, David Beckham or Pete Doherty... which is why you've probably never heard of them and why if they stick it out they'll wind up divorced and in rehab.

No, they're not gay! Yes, one of them is married! Just because they're British-- Jeez! Anthony McPartlin & Declan Donnelly, both 31, have been stars in the UK since they were kids. They've starred in kiddie shows, had hit records, hosted lots of variety and game shows (including I'm A Celebrity, Get Me Out of Here! featuring David Gest) and played themselves in the movie Love, Actually.

They even have their wax figures on display in Madame Tussaud's museum in London.

But a Sunday Mirror poll a couple of years ago found that 70 percent of viewers couldn't tell them apart, So photographs are always taken with Ant on the left and Dec on the right. And they're part of that peculiar British tradition of cutesy, nonthreatening, asexual panto boys that hasn't caught on here in the States.

The producers of Wanna Bet? are the same ones who brought over old Anne Robinson with The Weakest Link. And we know how her American career flourished...

I went to the Faith Hill/Tim McGraw Concert in Anaheim this past Friday night and almost fell off my chair. She came out in a black sequined halter jumpsuit that looked identical to the one Olivia wore at the end of Xanadu. I had to do a double take to see which concert I was at. Even found myself a bit mad and don't really know why. I wonder if she's an ONJ or Xanadu fan. The worst part is I was backstage before the show and could have asked her. Now I'm kicking myself that I didn't. Incidentally, I never got the feeling of two people being more full of themselves then the duo of McGraw/Hill.I understand why the fan grabbed his privates. His whole act is about flaunting his pectorals, walking around the stage with his arms out like Arnold doing a body building show.And I won't even get started on his Mrs. Anyway, It made me really appreciate Olivia that much more.I was only there because she's my daughter's favorite singer and I surprised her with the tickets and passes. Enough said..I have photos of Faith in the outfit if anyone's interested e-mail me and I'll send it over.
He Ivy, I wonder how your daughter would feel if you told her you hated her idol. Then maybe she could say, she hates Olivia?

Here is a link of a fan's pics. I don't see a resemblance...maybe i need to watch Xanadu again! LOL

No Vic you are not crazy, Ivy is just blind.

I agree also, no fan does have the right to do that. All I said was that I can see why it happened. He struts around on stage like he's g-d's gift to women and if you're going to put yourself out there like that, stuff like that is bound to happen. I think it might be a good scene for Sordid Lives the TV show. Trailer trash at its finest folks!

Yeah Ivy does not like Tim McGraw or Faith Hill fans so Olivia fans who love them should speak up now.

By Kim
Boy...NO ONE beats Olivia for a backstage meet and greet. With Olivia, you get actual one-on-one, conversation, pictures, autographs and hugs to boot.

Hey Kim, why don't we fake an illness and go backstage. This year we can pretend we have leukemia, MS or Aids even and get too meet Olivia because we love to lie.

They sure did break the mold! There will NEVER be anyone like Olivia in this lifetime--past, present or future. And when Olivia walks into a room, YOU KNOW IT!

Kim, we know to run into the other direction when you come into a room as well. Go away dark roots.

No, his was about andy garcia, a mint juliep and a worm...I remember THAT story!

I find myself getting very sad at all of the people who are passing away that I grew watching. Reminds me of my childhood or my own mortality I guess. Rest in peace, Mr. Griffin. (He was always wonderful with our Olivia, remember?)

It's a shame you are not more wonderful with the students you teach.

He always enjoyed having her on. All these people either passing on or retiring, brings back great memories.

Chris you need more memory at your age.

It's interesting that the obit doesn't mention any personal facts about Merv, including that he was gay. Of course, he was closeted and did no work for any gay charities that I am aware of. Though I think people have a right to live their lives the way they please, it's sad that he had so much wealth and power and didn't use it to influence gay rights.

Tim who cares if Merv was gay most people on the OO board are gay or lesbians. Ask Kim this is why she is always on the board to get some females tacos.

I agree. "Grease" the movie is SO much better than the stage version. They added songs are better than those in the original and the moving of other songs to the background was a good idea. Plus...Olivia Newton-John is in it!

Good boy Eric you agree with Kiliki you are one of the good OO followers.

Don't say anything bad you will be booted out of Only Olivia for sure.

What the hell happened to Kiliki, did she get booted off the board by dark roots Kim?

Hard to believe that August 16 2007 is the very sad 30th anniversary of Elvis Presley's passing!
Did anyone travel to graceland for it this week?
Scott C.

Boring! Scott, Elvis doesn't care if he is dead why should you?

So yesterday my friend brings me two birthday presents....It was a great surprise!

Yeah Tim, Kim leaving the board but what is a sweet surprise is she does not wear underwear to Olivia concerts.

So what do you think so far?

Overall, I think this is a boring BB so far, I want the backstabbing and lying to begin.....

So do I Dave when the OO members fight over backstage passes or who gets the better concert tickets for kissing up to Melissa, Kevin or Dale.

Carrie what an idiot likes old actors like Farrah and De Niro. Do you have anything better to do with your time?

Snoopy great post mentioning Viagra then it gets deleted because apparently some members like Tim, Kevin, Scott and Jim are taking it.

Chris and navdoc love part of your world. Then get out of OO because they want to become part of everyone's world especially controling freaks.

Patrick let's talk about Olivia's concert rider and how her band is alcoholics since you brought it up.

Then let's talk about how stupid it is to bring up Olivia's bottled water she drinks while touring.