Sanjaya: The making of a super villain? 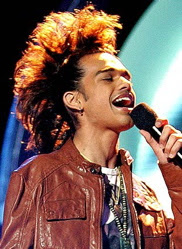 The Chicago Sun-Times writes of death threats against an ironic Sanjaya promoter, USA Today claims that Idol's "credibility" may be at stake, and the L.A. Times suggests he "made a mockery" of the show and compares him to a prisoner at Guantanamo!

"Surely Sanjaya is aware... of the counter-Idol movements that are promoting him. Has he taken up their banner as Idol's anti-hero? If so, this introduces a toxic element which has never been unleashed on the Idol stage.

"Another factor... if it is true... that Blake, the Chrises and Phil Stacey are all roommates, this means that in the guys' dorm, the surviving gentlemen contestants are all in one room together -- except Sanjaya, who then would be in a room by himself.

"...So we can visualize the specter of Sanjaya, after watching his roommates be killed off one by one, sitting along in his cavernous, cold, bare dorm room while the cool kids party down the hall, surfing the web and seeing how one girl is starving herself demanding he be kicked off while at the same time he has become a hero to a generation of Idol haters. . . . you don't need to be a Carl Jung, just someone who reads enough comic books, to know that this is how super-villains are born..."

Ah... and what of the Desi factor... and suspicions that he's remained on the show thanks to automated call centers in India?

Uber Desi, the website tagged as a prime mover on that front, has offered sharply-debated denials-- but the most interesting clue appears today:

Update: The number to vote for Sanjaya this week is 1-800-IDOLS-04. Remember you can vote as many times as you can dial till 2 hours after the show concludes.

Meanwhile, Dial Idol has him in the Top 4 right now... so who's behind it?

C'mon. We like conspiracy theories as much as, and more than, the next guy. But in Sanjaya's case, his appeal seems obvious. Amid the big diva belters, boy band scale riders and karaoke wannabes, Sanjaya looks like a teen idol. He's got a twisted charisma. Every week, he gives the audience something to look forward to.

And for two weeks in a row, he's made us laugh out loud!

For Idol, Sanjaya is good for ratings. He's helped people forget Antonella Barba. Yes, he seems to have taken the hate to heart. But he won't be around forever. Soon the producers will clear the decks to give attention to the big charity event. And they'll turn to the call centers in India to pump up the vote against him.
Posted by tabloidbaby at 3/28/2007 01:16:00 PM