"I feel for you, cause you've taken a lot of stick in the media. I think you've handled yourself well throughout, and I don't think anyone should be put in that situation. But I'm not going to patronize you here..."

As the situation mushrooms from a naughty half-naked photo scandal to charges of discrimination, racism, favoritism, unpatriotism and porn-peddling immorality behind the scenes of America's top television show, the Antonella Barba scandal finally got a mention on American Idol last night. Simon Cowell stepped gingerly around the controversy while doing his best to subliminally order viewers to vote the poor thing out before things get even farther out of hand. His comments to Antonella after she managed to mangle a Corinne Bailey Rae easy-listening Starbucks staple constituted a gracious kiss-off to the worst remaining female singer.

Antonella, true to form, didn't get it.

Said Simon: "You've gone as far as you can go, Antonella. I mean, the reality is, and I think you know this yourself, which is, you are surrounded by some pretty amazing girl singers. And I don't know how much more you can do, to be honest with you, because I don't think your voice is going to get any better.

"I feel for you, cause you've taken a lot of stick in the media. I think you've handled yourself well throughout, and I don't think anyone should be put in that situation. But I'm not going to patronize you here. It wasn't your worst, we've heard you sound worse, but I just have a problem here, which is I just wish you could sing better."

As she did last week, Antonella responded to the criticism by challenging it. She said, in part: 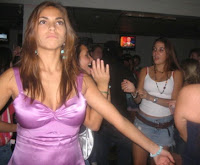 "I know I'm surrounded by really talented people and I think that I'm just, I have a different style than them and I'm not trying to compare myself to anyone else and I with the judges wouldn't compare me to anyone else because I try to be myself... We're all different, we're all unique."

Two gals and two guys will be eliminated tonight at 8. Our money is on Antonella hanging in. And if she does, don't be surprised if "someone" leaks more-explicit photos that they've been holding back, so Idol producers have no choice but to ask her to leave the competition.