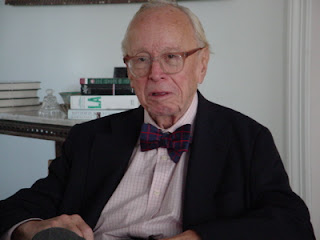 He was a Pulitzer Prize-winning historian who helped shape history working in the Kennedy White House. But to Arthur Schlesinger, Jr., his greatest accomplishment was dancing with Marilyn Monroe.

Schlesinger died last night at 89. But he revealed that secret—and blasted Oliver Stone— when we spoke to him at his home in Manhattan during the production of All The Presidents’ Movies, Frozen Pictures’ acclaimed documentary series for Bravo that's now set for release in a deluxe DVD set in April.

The three-hour extravaganza, narrated by Martin Sheen, reveals the untold story of the White House theatre, where Presidents, their family friends and guests watch movies in private. And in these exclusive outtakes from our interview, Schlesinger spoke of his days with John F. Kennedy. And he reminisced about the famous JFK birthday party at Madison Square Garden on May 19, 1962, when Marilyn Monroe serenaded the President in a gown she had to be sewn into.

“It was very tight,” Schlesinger recalled. And he recalled a party afterwards:

“Bob Benjamin gave a party after Marilyn Monroe sang ‘Happy Birthday To You’ at the Madison Square Garden. And Marilyn arrived. Her date that night was Arthur Miller’s father. You know that she had broken with Arthur Miller, but she was fond of the old man. And he came, and she was lovely. Rather spacey. I danced with her a couple of times. One of the great memories of my life. She was charming.” 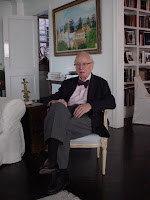 Schlesinger was not so fond of Oliver Stone, and his movie about the JFK assassination:

"I did see JFK. And I thought it was a travesty on history. I went to Europe shortly after it, and I discovered people really believe Kennedy had been murdered by a complicated plot in which the FBI and CIA were involved, and even perhaps Lyndon Johnson. It was a skillful piece of filmmaking, and Oliver Stone is a slam-bang director, but it’s a very misleading film in my view."

He had a more favorable review for Roger Donaldson's 13 Days, which covered the Cuban Missile Crisis:

"I thought 13 Days was a pretty good movie. And generally historically accurate. I think the conflict in the film between the Kennedys, who were determined to get the missiles out peacefully, and the joint chiefs of staff was perhaps simplified, but it was based on the basic conflict in the policy. 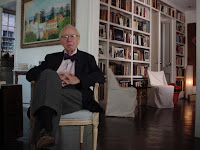 "I thought the man who played JFK, Bruce Greenwood, was very good. The great historical inaccuracy was of course the exaggeration of the role of Kenny O’Donnell played by Kevin Costner. I mean, Kenny O’Donnell was a fine fellow, but he had very little to do with the Cuban Missile Crisis. But basically, unlike the Oliver Stone film, JFK, it seemed to me to be a dramatically effective, historically persuasive film."

What did he think about kids getting their history lessons from the movies?

"Well, it’s bound to happen. I mean, beginning with Shakespeare, playwrights have drawn upon history for characters and conflicts and so on. And Hollywood, a level far below that of Shakespeare, is perfectly entitled to draw upon historical themes. You mentioned Oliver Stone. Oliver Stone’s 'Nixon' seemed to me quite a good movie. And it was historically accurate, whereas in JFK, it seemed to me a case of paranoia run wild. But you know, these things happen. And if people believe that Hollywood movies are the best way of teaching history, they are wrong. On the other hand, if people enjoy them as drama, it’s perfectly okay." 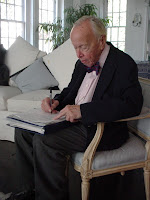 Schlesinger speaks in the documentary about JFK & Jackie's movie tastes. And he set straight the legend about JFK and James Bond:

“Jackie Kennedy was mostly interested in art house films. Foreign films she liked. And then she had very good taste in movies. But she enjoyed French movies particularly because she was bilingual in French. Jackie Kennedy was more interested in films than her husband. And she particularly liked international movies. And often he was bored by often these things. And he had other things on his mind. So often he would leave in the middle of a movie and go off and do some work."

JFK was said to be a James Bond fan. 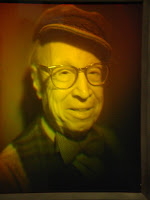 “He’s reputed to be a great fan of the novels. But I always thought that was a publicity gimmick, rather like FDR’s alleged fondness for 'Home On The Range.’ Steve Early put out one of those press queries what was the president’s favorite song? Steve Early said ‘Home on the Range.’ Whenever FDR went out anywhere they played 'Home on the Range’ literally. He got sick of it. Kennedy enjoyed one or two of the Ian Fleming novels about James Bond. Enjoyed some of the movies about 007. Um, I think it was exaggerated. It was kind of a publicity hook. He really read, spent most of his time reading history and biography rather than 007."

Stay tuned here for updates on the release of the All The Presidents' Movies DVD.