Exclusive! Michael Lohan is getting out of prison 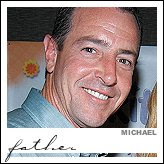 Michael Lohan,
father of superstar actress
Lindsay Lohan,
is set to walk out of prison
at 9 a.m.
on Tuesday, March 13th--
and into the reality TV show
he’d left behind
more than two years ago.

The controversial Lohan, who’s scheduled to be released after two years in the Collins Correctional Center near Buffalo, N.Y., will be feted at a "welcome home" party at his mother's home in Long Island. But the former stockbroker, producer and actor is definitely not the same man who was hauled away amid restraining orders and probation violations. Once known as the "Hollywood Dad from Hell," he's now an ordained minister, ready to spread the word and “make amends for his past mistakes."

“Michael Lohan is a changed man,” says the show's producer Brett Hudson, who along with Lohan’s mother has been the only one to keep in regular contact with Lohan in stir. “I've spoken to him often and I know it. The last time around, Michael would never admit he’d done anything wrong. Now, he not only admits his past mistakes, but he wants to right the wrongs he’s done. And most of all, he wants to get his family back on track." 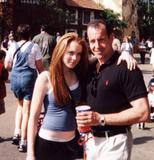 It was two years ago that Hudson and the team at Frozen Pictures were filming a reality TV series pilot around Lohan called “Hollywood Dad.” At the time, Lohan was best known for his hunger for the spotlight, his altercations (with in-laws and a sanitation worker), passing out at Scores nightclub and his intensifying battles with his estranged wife (and Lindsay’s manager), Dina. After surviving a fiery DUI car crash on Long Island, he was sentenced to prison.

While checked into the Gray Bar Hotel, Lohan was ordained as a minister. “He’s serious about it,” says Hudson. “He’s actually going straight into the ministry when he gets out-- the Teen Challenge ministry to help runaways and kids on drugs— trying to straighten out their lives. 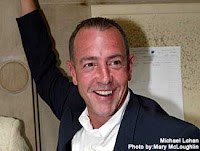 “But he’s still Michael in more than one way. He’s still very creative. You can see where Lindsay got her drive and her talent. He has a few reality shows he wants to pitch-- including one in which he and Lindsay are put on a desert island with Paris Hilton, Jessica Simpson and their dads. We’ll be going along when he does that. We’ll be with him when he tries to ‘save’ some of his old Hollywood pals.

“And he’s got other ideas, like going out on Sunset Boulevard and giving a prostitute a hundred dollar bill-- not for sex, but for her time so he can talk to her and try to save her. He wants to make things right with the world. And especially with his family."

In January, Lohan wrote his daughter a letter, asking forgiveness and a reconcilitation. Life & Style magazine reported last month that Lindsay is in favor of it.

"It’s a fascinating look at the price of fame— and what it does to a family,” says Burt Kearns, Hudson’s producing partner. “Two years ago, Michael was Bonaduce, Sizemore, the Diceman and Bobby Brown rolled into one. But his heart was always in the right place. God knows what he'll be like now that he's got religion. This was a great project in 2004 and it’s even better now. Because Michael’s better now.”
Posted by tabloidbaby at 3/09/2007 02:23:00 PM