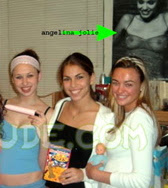 But our analysis reveals there's more to the photo above than you might notice at first glance. What exactly is Antonella holding? And would you want your American Idol endorsing this product?

i'm guessing this was a secret gift exchange sort of thing?