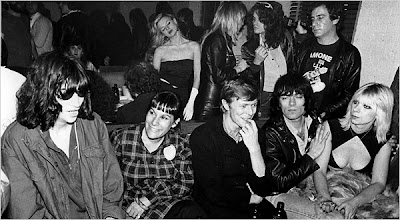 Linda Stein was married to Seymour Stein, who signed the Ramones to Sire Records. Linda managed the band with Danny Fields. Linda and Seymour divorced. The New York Times reports "The Steins eventually grew apart, and divorced in the late 1970s. A Vanity Fair profile of Ms. Stein later quoted her ex-husband as saying: 'Our marriage for me was like eight years on a roller coaster, and not always strapped in'... Despite the divorce, the Steins stayed in touch. 'They fight and then they make up,' Mr. Fields said. 'It’s like they’re married, but they’re living separate lives.'”

Linda (above, next to Joey Ramone) "went on to become known as a real estate agent to the stars." She "was found bludgeoned to death Tuesday night in her apartment at 965 Fifth Avenue... shortly before 10:30 p.m. by her daughter Mandy and a friend.. Ms. Stein’s body was found face down in the living room in a pool of blood, the police said. She was wearing a sweatshirt with a hood, which was pulled over her head. Investigators at first believed the bleeding could have resulted from a fall, but when the hood was pulled back, a severe skull injury was exposed. Yesterday, the medical examiner’s office ruled the death a homicide." 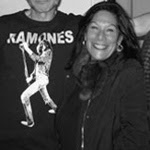 I felt like I knew her because I read about her often in New York magazine. What a terrible thing to happen.

Well not all Hollywood stars finish in a good way, i can't believe what be famous can do to someone, it's amazing.