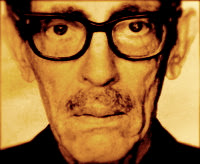 Another reminder from Tabloid Baby pal and contributor Dr. Franklin Ruehl: He plays a "church ghost" on the extra-spooky pre-Halloween episode of Ghost Whisperer, seen in most places at 8 pm on CBS. And lucky Los Angelenos can add to that treat, catching a prime time doubleheader of Dr. Ruehl's classic public access chat show (he does most of the chatting), Mysteries from Beyond The Other Dominion, immediately following his network guest-starring role (without his trademark glasses!).

At 9 pm on Time Warner's Channel 25, he promises a special episode that also serves as the pilot for his proposed "The Amazing World of Western Fact & Fiction," followed by the answer to the timeless question, "Has The Speed of Light Been Surpassed?" at 10 pm on Channel 98. May the Power of the Cosmos be with you! Yes! Yes!
Posted by tabloidbaby at 10/26/2007 02:06:00 PM

For all that work the doctor's doing, he can go on a shopping spree at IKEA and scare everybody with that old face and fake accent. Or torment Teresa Strasser, which would be much more productive.

You're only young and beautiful for 5 minutes. Unless you're Adam Carolla, who got gypped.