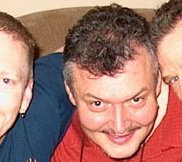 How’s this for a deal: If you’re a director on a movie, and you’re directing a child as your star, and you molest the child-- you don’t get to direct another movie!

Not the case with Victor Salva, the Hollywood director who molested one of his child stars, yet continues to make movies with kids, thanks in part to his patron, Francis Ford Coppola, according to a sickening article that’s been on the LA Times' website for a couple of days before hitting today’s paper.

When Victor Salva made a movie back in 1988, he took time from setting up scenes to have oral sex with the movie’s star, a 12 year old boy. A director, whose power over ingénues and grown men alike can be scary enough, who wangled his way into a stage family and assured the parents he could be trusted to force their child to follow his directions-- had sex with the little boy. Stated simply: He blew the kid. Or had the kid blow him (these "oral sex" charges aren't specific). Salva is a troubled, disgusting, overweight pig. His victim was a child. 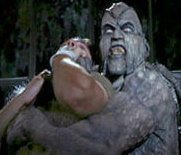 Salva was not executed by the State, nor shot dead by the parents. He was sent to prison. When he got out of prison, he was allowed to make another film. Powder was set in a high schoool full of kids. It told the story of a magical albino whom no one understands, sort of like Christ or Michael Jackson or a child molester.

Salva went on to direct the Jeepers Creepers movies. Now, in between therapy sessions for a problem he’s apparently still dealing with, the child molester director is pimping a new Nick Nolte movie, and getting a sympathetic hearing in the nonjudgmental L.A. Times, whose Patrick Goldstein bends over backwards to give "both sides of the story" :

The article (that's the mangled subtitle as it appears on the Times site-- webmaster's revenge?) includes an interview with Salva, who plays the victim while indicating he's trying to make himself more attractive to the little ones: "I made a terrible mistake, one I wish I could take back every day of my life," he said over lunch at an eatery in Beverly Hills. A bulky man with a scraggly beard and a soft-spoken manner, Salva only sipped iced tea, having recently undergone gastric bypass surgery to lose weight…”

You can gag on the rest of his sad story over breakfast. We’ll give you highlights from the Francis Coppola section: 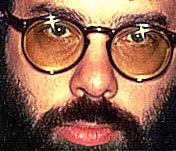 Throughout Salva's tribulations, Coppola has remained his loyal patron. After Salva's release from prison, Coppola gave him $5,000, which he lived on for a year. When MGM was nervous about hiring Salva to direct "Jeepers Creepers," Coppola, then producing a slate of films at the studio, vouched for him.

"Someone had launched a campaign against Victor, saying, 'How can you give this guy a movie to make?' " recalls Coppola… “So I helped Victor get the job… My attitude is, he has a talent, and that talent in itself is good. We don't have to embrace the person in believing that their art is a contribution to society."

Coppola was on hand for some of the filming of "Clownhouse" — since it was made, in part, at Coppola's home in Napa Valley. "I didn't know of anything improper going on, although I witnessed some things that caused me to raise an eyebrow," he says. "Only in retrospect did things really add up. You have to remember, while this was a tragedy, that the difference in age between Victor and the boy was very small — Victor was practically a child himself." (Actually, Salva was 29 to the boy's 12.)

Back in our New York City years, we were working the 10 O’Clock News with Our Man Elli around the time Norman Mailer helped a convicted murderer named Jack Henry Abbott get out of prison because he showed talent as a writer. Abbott went down to the East Village and stabbed a waiter to death. Back then, people said Mailer had blood on his hands.

You don't have to be Sean Hannity or one of those other right wing lowbrows to get worked up over this one. You just have to be a parent or relative to a child. We're in the business. We work in Hollywood, noted for our hit comedy, Cloud 9. And we know the closed worlds of movie shoots. What happens when it‘s revealed that Salva blew another kid (or forced a kid to blow him) on one of his creepy movie sets? It's long been known that Hollywood embraces criminals and deviates. But what about the LA Times? Will the paper ever lose its attempt at hip distance and objectivity, and take a stand on practices within its hometown industry? We don't think so. Not as long as great artists like Roman Polanski, Woody Allen, Bryan Singer and Victor Salva agree to give them exclusive interviews in fancy eateries.
Posted by tabloidbaby at 6/11/2006 07:03:00 AM

Francis must be getting loopy. Victor's talent isn't all that fabulous. There are a couple of million wannabe directors pounding the pavement who can be trusted around kids--who can't get jobs.