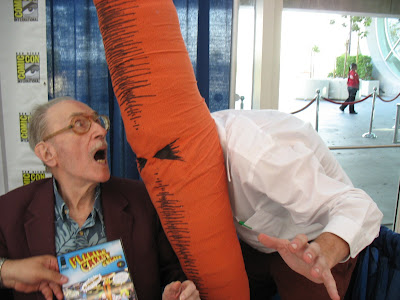 The greats are dropping like flies in the realm of Tabloid Baby pal, contributor and columnist Dr. Franklin Ruehl, Ph.D.: No sooner does he hand in his remembrance of actress Beverly Garland than sci fi legend-- he invented the term!-- Forrest J. Ackerman pops his clogs!


Forrest Ackerman: A True Hero To All
Sci-FI, Horror and Fantasy Buffs!!
by Dr.Franklin Ruehl, Ph.D.
As a youngster watching television, I became absolutely enamored of sci-fi and horror films (such as Rocketship X-M and The Wolf Man) and TV programs (such as The Space Patrol and Rocky Jones, Space Ranger).

Then, imagine my delight when I discovered Famous Monsters of Filmland, a publication created by Forrest Ackerman devoted to this very subject! Forry was, of course, the ultimate fan, amassing a mind-boggling 300,000 items of memorabilia from every arena of the sci-fi/horror/fantasy genre, including Bela Lugosi's ring from Dracula and Lon Chaney's cape from The Phantom of the Opera. He had known both Lugosi and Boris Karloff personally. And most appropriately, he coined the term "sci-fi" in 1954.

While he made cameo appearances in a handful of films, such as The Time Travelers and Planet of Blood, I think that he should have been offered more substantial roles as he was clearly a natural for the silver screen.

In later years, I frequently interviewed Forry on the telephone for articles on Tinseltown that I was writing for various publications. He was always generous with both his time and knowledge, truly a gentleman and a scholar.

One of the highlights of my life was meeting him personally at the Los Angeles Convention Center in 1991 where he autographed a copy of his book, The Frankenscience Monster, written as a tribute to Karloff shortly after his demise in 1969. Not surprisingly, it is one of my most cherished possessions.

Last year, I had the high honor of speaking with him at the Hollywood Collectors Show at the Burbank Hilton Hotel, where he was graciously fielding questions at a table. 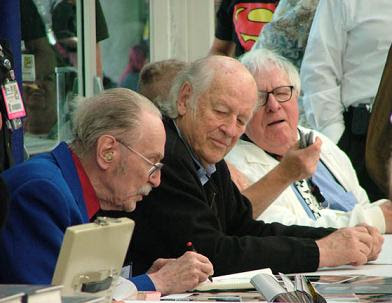 The last time I saw him was earlier this year in Glendale, CA, where I live. He and celebrated author Ray Bradbury were being pushed at breakneck speed in their wheelchairs down Brand Boulevard to an evening appearance (along with legendary creature creator Ray Harryhausen) at a local bookstore. While I was saddened to see that they needed wheelchairs, I was heartened by the unrestrained delight they took in seeing so many fans awaiting them. I shouted, "May The Power of the Cosmos be with You!" as they passed by.

After overcoming some health problems a few years ago, Forry expressed the goal to reach 100. Sadly, he did not quite make it, passing away the other day at age 92. But he will be always be remembered by all sci-fi, horror and fantasy devotees!!