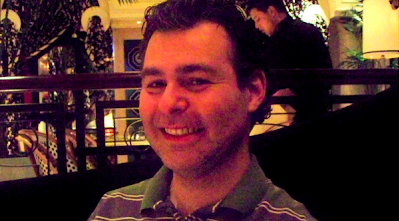 Las Vegas blogger, New York Times stringer, Gay Vegas author, concert promoter and comp queen Steve Friess apparently made some embarrassing errors when he brought his opinionated work to Los Angeles in the form of a reheated LA Weekly cover story on the tragedy of LA Times sportswriter Mike Penner, who committed suicide after coming out publicly as a transgender, then changing his mind.

A correction in the LA Weekly print editions and website today reads:

"A story published August 20 about the life and death of former L.A. Times sportswriter Mike Penner incorrectly spelled Amy LaCoe's last name as LeCoe. In addition, the story should have said that Penner's father died 12 years ago, not when Penner was 12 years old; that Penner met his future wife, Lisa Dillman, when she worked at the Detroit News, not at the Minneapolis Star-Tribune; and that the couple wed in 1986, not 1987."

We'd criticized the article after it was published in August as a riff on past coverage, including details from a comprehensive Los Angeles Times article, and spanked Freiss for his lazy and kneejerk degrading descriptions of Los Angeles architecture.

Friess came to our attention in May 2009 when he attacked us publicly for asking questions about the mysterious death of Las Vegas superstar Danny Gans. He later helped in an active campaign to mislead reporters on the case-- and made a move to have this site closed down.

more correctiosn to come, I beleive...

A field operative is an engineer who works to identify and solve IT and telecommunication problems in the field. Such individuals attend a variety of sites where they work to solve issues in a fast, efficient manner.

Design an eye-catching brochure fast with PhotoADKing using its free brochure templates. Customizable, with a professional look that fits your business.

California CRM Software plays a vital role in managing the whole sales process to beat the competitors with 100% guaranteed tactics.

Choose our professional writers and leave all your tensions of researching critical college assignments on our shoulders! GoAssignmentHelp.com.au are equipped with a vast team of professionals and knowledgeable topics tutors and experienced who make sure that you will get the assignment help online you deserve for. We have service team who are available 24 x 7. You can send your questions through email, chat, or send a Whatsapp message. We will provide you quick response to every question about your university assignment help australia related. If you need help with your documents, why not give our professional service a try today? Don’t waste your precious time and contact to our Assignment Provider. GoAssignmentHelp.com.au know that your time value. Call us now and get best Finance, Accounting, Business Law, Computer Science, Statistics, Management, Engineering many topic related assignment service.