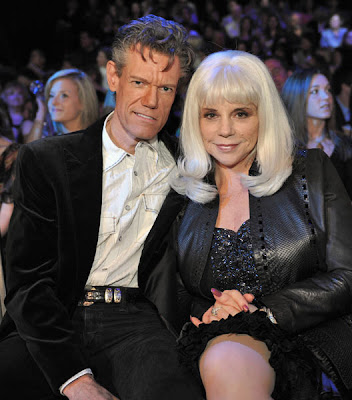 Randy Travis is 51. Lib Hatcher is somewhere around 70.

Though there have been rumours Lib might have been Randy's "beard" (they did have a house in Hawaii), there were reports back in July that Randy was cheating with the wife of his dentist. Lib reportedly caught him by sticking a spycam on his tour bus!

Randy and Lib have been together in one way or another for 34 years, ever since he, as the teenage Randy Traywick won a talent contest at the nightclub in Charlotte, North Carolina that Liz owned with her first husband. Randy was 17. Liz was 37. She left her husband for young Randy. 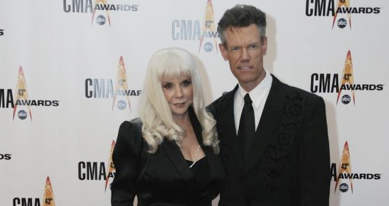 Randy and Liz' relationship raised eyebrows in Nashville and beyond in the 1980s. As far as anyone knew, the older woman Liz was the only girlfriend Randy ever had. They married in 1991.

The couple has a home in Sante Fe, New Mexico. Randy Travis filed the divorce petition in nearby Albuquerque on Thursday. The petition calls for an equal split of assets, and doesn't give a reason for the split besides saying a "state of incompatibility exists between the parties."

Lib will stay on as his manager.

Randy Travis was considered "too country" when he broke in Nashville in the Eighties, but Lib Hatcher got him a record deal. His first album, Storms of Life, was released in 1985 and is one of the greatest country music albums of all time.
Posted by tabloidbaby at 10/30/2010 09:35:00 PM