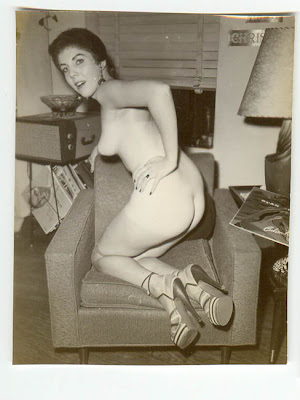 Everybody knows you don't go after a person's mother.
--Tabloid Baby, pg 428
We were waiting to see how low the McCain campaign would go in its desperate attempts to drag down Barack Obama, but of all the lowdown tactics pulled by the angry old prisoner of war and his embarrassing, shockingly unqualified, empty-vessel demagogue attack dog of a vice presidential candidate, we didn't expect they'd go after Obama's dead mother on the same day he'd taken time to visit his dying grandmother. The picture above and a couple of more like it were unearthed, probably doctored and leaked to some operative blogsite with the claim that the woman pictured could possibly have been Obama's mother, Ann Dunham Soetoro, with bizarre analysis equating jazz albums in the pictures to communist ties and possible questions about Obama's true paternity. 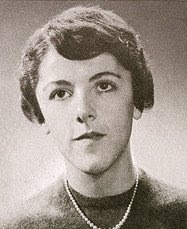 After all the scare tactics about Obama being a terrorist (and black!), this is what they were holding back? The photos have no potential possible effect on Obama's campaign, so the entire reason they were posted was to throw more mud. And with a week and a half until the election, it's frightening to consider what the GOP, Fox News and Bush family-- with their decades of connections to the bin Ladens of Saudi Arabia-- might try in an attempt to shift some votes away from the next President of The United States. These are the kinds of scumbags who've got to be left behind.

Get off your Democrat high horse, if that was a GOP dead mom you Bullshit hypocrites would have it splashed all over your "far left" sites in a heartbeat.

The photo is doctored. The shoes give it away. They did'nt have those fuckin' stripper heels back in the 50's.

Maybe Michelle can be a stripper and give hubby a lap dance! Just picturing it makes me want to throw up, makes me laugh though to think that rumble seat built for two wiggling on his lap!!! BLAHAHAHA