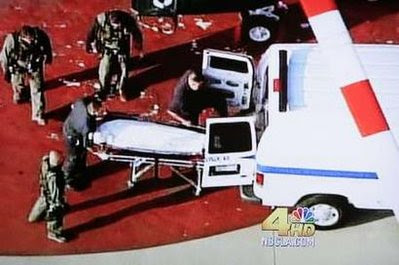 The corporate porn-pushing gossip site TMZ.com has gotten credit by its mainstream colleagues-- the ones who often use the sewer site as a legitimate news source-- for breaking the news that Michael Jackson was dead. However, TabloidBaby.com's investigation and common sense analysis of the situation makes it very clear that TMZ was ahead of the curve because they took the same reports everyone else had and extrapolated from them that Jackson had died.

In other words, TMZ's shaved bronzed midget frontman Harvey Levin and his ill-wishing celebrity taunt team closed their eyes, put all their money on the number 86 and held on tight until they found out they were correct.

In other words, they guessed.

Let's go back to yesterday afternoon...

Word that Michael Jackson had been rushed to a hospital in full cardiac arrest was a shocker when it was text-messaged to us yesterday afternoon shortly after 2 pm. More shocking was the headline that appeared on the Drudge Report, stamped at 1:43 p.m. Pacific Standard Time:

The Drudge headline linked to TMZ.com, which at 1:30 PM PST had run the post: 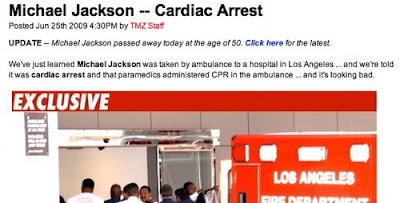 Two minutes later, Drudge switched to Code Red and all caps in a red headline accompanied by his flashing police light:

Again, a link to TMZ.

Meanwhile, other news organizations were reporting that Jackson had been taken to UCLA Medical Center in full cardiac arrest-- but no one would say he was dead. There were reports he was not breathing when paramedics arrived at his home, and other reports that the paramedics were performing CPR in the ambulance. All signs pointing to a dead celebrity-- but no confirmation.

That, although Jackson was not officially pronounced dead until 2:26 p.m.

Even after 2:30 pm, The Los Angeles Times website and CNN were reporting that Jackson was hospitalized in a "deep coma."

Soon, the death was confirmed.

Despite the time stamp and the Drudge links, the Los Angeles Times reports today that TMZ beat the lamestream news media by only a few minutes:

"At 2:44 p.m., it beat rivals by informing the world of his death, which occurred at 2:26 p.m. ...Yet the tabloid sensibilities of the site, which is owned and operated by divisions of Time Warner, and its accompanying syndicated TV show apparently made rivals queasy. Many outlets around the world instead credited the news to the Los Angeles Times, which bannered Jackson's death on its website at 2:51 p.m."
The news hit Drudge after 3 p.m.

THE KING IS DEAD 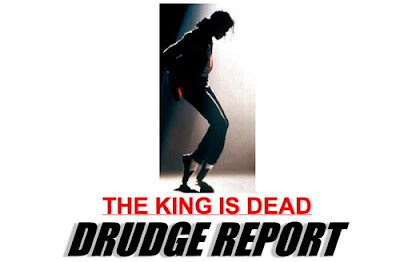 While all this was going on, as the confusion reigned for more than thirty minutes, the tabloid veterans monitoring the coverage on the Internet and television simultaneously came to the same conclusion: TMZ.com did not get the scoop because its band of boys has better sources, paid sources or inside information at the notoriously-leaky hospital than their competitors.

TMZ had the same information everyone else had.

TMZ went with the death report on a hunch, figuring the odds were in their favor.

Remember, they had this information to go on:

Jacko had been hospitalized with cardiac arrest;

Jacko was not breathing when paramedics arrived at his home;

Paramedics were performing CPR on the way to the hospital.

Based on those reports, the tabloid television veterans monitoring the situation also assumed Jackson was dead. TMZ, however, went with the news.

Harvey Levin will claim it was great reporting and inside sources that gave TMZ the edge, but take our word for it: TMZ.com had the same sources as everyone else. And no one else accepted TMZ as a source and went with the story because they knew the game. Even TMZ's sister network CNN didn't take their word for it because they know the imitation tabloid television game Harvey was playing.

Harvey, who has a history of imitating other people's tabloid strategies, often to disastrous results (see the OJ Simpson trial), was playing Dan Rather. 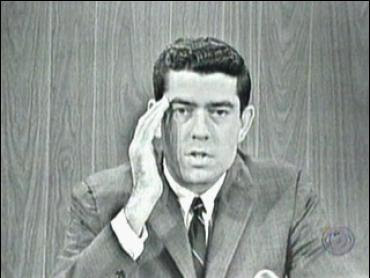 On November 22, 1963, CBS News reporter Dan Rather was the first to report the death of President John Fitzgerald Kennedy after he was shot in Dallas, after hearing an unconfirmed report from a priest. The news went out, and Rather, knowing he could be wrong, prayed that he was right and that JFK was dead, so he wouldn't be fired (he writes about it in his book).