Throughout our coverage of the Las Vegas news media's lax coverage of the death of local superstar Danny Gans, a local writer named Steve Friess has gotten more than his share of attention, beginning when he went on the public attack against us after we emailed him privately for his take on the situation. In the weeks to follow, the author of Gay Vegas and stringer for the New York Times tried to have us shut down and refused to allow us to use his photo, forcing us to use facsimiles, as he was revealed to be part of an organized campaign to cover up the details of Gans' life and death.

This morning, Friess has surfaced in the pseudo-alternative Las Vegas Weekly with an astonishing excuse on behalf of not only himself, but the entire local news media for its unforgivable lax coverage and coverup of the drug overdose death, and apparently secret life of, a unique superstar entertainer.

In a city with such a colorful history of corruption and criminality, with a press that is world-renown as little more than public relations lapdogs, the holier-than-thou screed from the notorious comp queen is beyond astounding. For this one, we will use Steve Friess' actual photo, because readers should be able to connect the words with the face. We present his article, along with the frightening photo of Danny Gans chosen by a sly photo editor, unedited-- with a few footnotes: 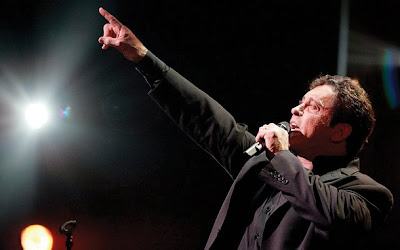 In New York and Los Angeles, when a major star drops dead of unknown causes, there is a repulsive ritual that takes place. (1) A certain breed of journalist will begin a vigil outside the deceased’s residence, will rifle through their trash, will bribe all sorts of people for all sorts of reasons and will call up anyone and everyone even questionably related to the person for even the most unlikely comment. (2)

In Las Vegas, when left to our own devices, we do things a little differently. (3) And I, for one, couldn’t be happier about that. (4)

Danny Gans’ death provided an intriguing case study of that difference because of his strange status as this massive, mega-wealthy star whose fame essentially ceased to exist beyond the county limits. (5) As I wrote some weeks ago in this space, I was on the front lines of trying to get someone beyond Las Vegas to take interest after Gans’ wife found him unresponsive early on May 1. (6)

"In Las Vegas, when left to our own devices,
we do things a little differently."

The national press noted the death with a minimum of interest and then moved on (7) even as questions remained in the air about what killed the impressionist following an inconclusive autopsy. Even the tabloid media only dabbled in it vaguely, owing probably to paltry interest (8); PerezHilton.com’s few postings on the Gans matter drew just a couple dozen comments, most of them from people wondering who Gans was. (9) A typical Perez post draws hundreds of responses. (10)
This left the Las Vegas media to tackle the matter without the influence of outside forces. (11) And so there was no vigil at the Gans household, nobody got bribed (12), and his widow and children were left to attend to their grief.It’s not that journalists here didn’t want to know and report what had happened to Gans. (13) It was that nothing we could report could be concrete, backed up by any data. (14) Reporters were stuck in a holding pattern until the toxicology reports were completed, (15) because absent of an official report by the scientists analyzing Gans’ remains, no amount of speculation could be credible or based in fact. (16)

Oh sure, we could have traded in rumors. (17) That’s undoubtedly what would have happened had Gans been a star whose death became a national obsession. But even then, it wouldn’t have been the legitimate media airing theories and conjecture, it would’ve been unrestrained talking heads on cable TV and some breathless tabloid hacks. (18)

One Internet rumor that Gans had a legion of pill bottles strewn about his bed (19) was an interesting case in point. Nobody ever said this on the record, (20) and try as I might (21) I couldn’t find the original source of this claim. It’s an urban legend, both unprovable and impossible to disprove, fodder for those wishing to grab on to something. (22)

But hey, let’s take it as truth for the sake of argument. So? Let’s stir in the suspicion among many that Gans took steroids. (23) So? Have we now proved anything? (24) Let’s put that unsubstantiated conjecture on the front page of the newspaper. (25) So? Have we now informed the public of anything that we know to be true? (26) No.
During the quiet period, those six weeks until Coroner Mike Murphy’s June 9 press conference revealed that Gans’ death was caused by some vague interplay between the powerful pain pill Dilaudid and his heart condition (27), the Vegas media took a licking. (28) One particularly strident commentator (29) looked in on the case from afar (30) and insisted that at worst there was a cover-up (31) and at best the town was being covered by a lazy group of journalists not doing their jobs. (32) More than one person suggested this could be the story of the century, that it was Pulitzer bait. (33)

Except that it’s not. (34) It’s just a celebrity death. That’s all. (35) It’s a sad and curious event, sure. But a story of consequence? One that impacts the day-to-day lives of anyone beyond the bereaved? No. (36) This wasn’t even a celebrity who liked the limelight. Unlike other celebrities whose deaths were being used as yardsticks-- Anna Nicole Smith, Heath Ledger, Elvis Presley- Gans didn’t use his self-destruction, if that’s what it was, to market himself. (37)

That’s just a little bit of perspective, (38) and it’s something that Las Vegas reporters were surprisingly able to hold on to because the tabloid-industrial complex didn’t rush in to pervert the situation. (39) Indeed, it’s become so normal for the lurid details of entertainers’ lives to be exploited (40) that it’s become not only expected but, in some quarters, viewed as good journalism. (41)

Now that the coroner has made his ruling, the media has certain facts to work off of, and has done so. (42) Review-Journal Editor Tom Mitchell wrote this week that the paper is trying to unseal the autopsy results (43) because the Dilaudid explanation raises more questions about whether Gans was an addict to that or something else (44), and whether his doctors were irresponsible. Mitchell made that pursuit sound hopeless. (45)

The Las Vegas Sun’s Marshall Allen, the medical writer who had already been digging in on the data related to the reckless overprescription of pain medication in Las Vegas, came back on June 11 with a piece quoting pain and addiction specialists suggesting there must be more to the story. (46) All that is as it should be. If there is an issue of broader societal relevance in the Gans death, (47) it’s as a high-profile example of what Allen has been writing about for months. That problem actually does impact thousands of other patients in Nevada. (48)

"Unfortunately for those who desire more,the rest of the informationis tightly controlled by the Gans family and perhaps the Wynn Resorts folkswho made the deal to sign Gans."


But until the coroner had offered his conclusion, Allen couldn’t go there, because had he been wrong— had something unrelated felled Gans— the journalist’s credibility would have been shot, and the stories written would have had to be retracted.(49) Whether this analysis happened on June 11 or May 11 made no actual difference to anyone, except that on June 11, it had the force of science behind it, too. (50)
I have certainly chastised the Vegas media for not being aggressive enough in many past instances, even related to celebrities. (51) It outraged me, for instance, when journalists gathered for a roundtable with Criss Angel weeks after he had threatened to blind R-J columnist Norm Clarke didn’t even ask about it. (52) Physical threats to reporters would seem like something journalists would rally around, (53) but only my Weekly colleague Richard Abowitz and I dwelled on it much. (54)

Yet in this situation, there was a sequence of events that had to unfold. And it did. (55) And unfortunately for those who desire more—and given Gans’ lack of notoriety outside Vegas, that desire is extremely limited (56) — the rest of the information is tightly controlled by the Gans family and perhaps the Wynn Resorts folks who made the deal to sign Gans. (57)

Sure, it would be interesting to know the rest of this story, (58) and I suspect little bits will come out here and there. (59) So far as I can see, though, this was a job well done by the Vegas press in maintaining a certain level of dignity and credibility that is quickly vanishing in big-city media circles. (60)

Far from calling this a symptom of why the old media is failing, (61) I posit another conclusion: Perhaps it’s a reflection of why the old media was so successful in the age before it became commonplace to dwell in the cellar with the heartless, scum-sucking trolls. (62)

Brilliant - "the annotated Alice uh, I mean...Friess". LMAO when I read it.

Comp Queen, you just keep digging a bigger hole for yourself. Why don't you just go down the rabbit hole and leave journalism to the people who still remember and honor their responsibility to the public.