It's been two weeks since Las Vegas headliner Danny Gans was pronounced dead in his home of still undetermined causes.

From the first we heard the news of the passing of this great, historically significant and unique entertainer, the Tabloid Baby team has pursued the story day after day, while being struck by the fact that Las Vegas journos didn't find the story worth pursuing beyond adulatory quotes from the likes of Carrot Top (Nothing against Carrot Top. We think he's cool and he makes us laugh). The official excuse was that there was no news to report until the officials released the official cause of death with the official toxicology report, since the official autopsy could not determine what caused this ox of a man's heart to stop at the age of 52.

The first solid clue there was something amiss came when we were attacked, threatened and insulted online by a character named Steve Friess (above & left), a local booster and comp queen who authored a book called Gay Vegas and writes for a number of national publications.

Friess' online hissyfit when he learned of our dogged pursuit of the Gans story was puzzling, until it was revealed that his conflicts of interest only began in his bed, which he shares with Alicia Jacobs' executive producer, and that this self-promoting freelancer exists at the pleasure of the casino kings to whom the words "What happens in Vegas stays in Vegas" are more than a catchphrase.

Well what a difference two weeks, or as he writes on his blog, a "fortnight," makes.

"Some gay-obsessed lunatics -- well, he refers to himself in the plural, anyhow -- believes anything said about the matter at this stage is thanks to his 'vigilance.' I've since realized that Internet nutjobs will say and do what they wish regardless of accuracy, propriety or basic common sense and never back down even in the face of contrary evidence or reasoning..." 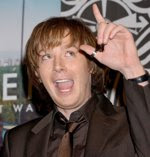 Friess goes through his usual motions: attacking RadarOnline, The National Enquirer and Perez Hilton for covering a story that he could have made a bundle on had not his freelance status been so compromised; denying there's "public appetite" for the story; insisting that "short of those tests being completed, there's not a lot for legit reporters to do."

But then Steve Friess (above left) does something more. While apologizing on behalf of the ones who tried to obfuscate the facts, he admits that he realizes a coverup took place. And while making excuses all along the way, he even slips up and admits he was part of it.

Most spectacularly, Steve Friess admits he has been covering up the story of the real Danny Gans for at least, well, at least... a "fortnight":

"...Gans' suspected steroid use has been out there for years."

He also prints the alternative theories that are out there, though carefully labeling them "bizarro":

"Danny Gans was (a) actually killed in a DUI hit-and-run; (b) was having an affair with a local news personality who has tried to get Mayor Oscar Goodman and Wayne Newton* and Las Vegas Chamber of Commerce (!?!) to help cover up Gans' actual cause of death or (c) committed suicide because Steve Wynn booked Whoopi and Beyonce..."

Read Friess' entire column here.  It is an incredible document of self-righteousness, delusion and ass-covering.  Bottom line: Everything Steve Friess denied, he now says he knew all along. 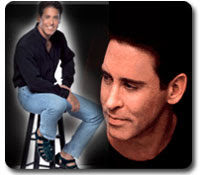 Meanwhile, real journalists, like the ones at The Las Vegas Review-Journal, responded professionally to our prodding. Insiders tell us they feel bound by "rules," and are hamstrung to do much before an official report is released.

But they admit our prodding has had an effect.  Mike Weatherford's chilling account of Danny Gans' depression on his final day was published after sitting around for more than a week. And Norm Clarke's hastily-added one-liner begs a followup:

"No one's willing to discuss it, but there's an insurance issue involving Danny Gans and his deal with Encore at Wynn Las Vegas that suggests Gans had concerns about his health."

Sure, they say we at TabloidBaby.com seem to be "obsessed" or even "insane." And there are those who'd try to lump Tabloid Baby with the new generation of bloggers who conjure fantasy and post whatever comes into their heads.

This is the Old School talking.

Decades of newspaper and broadcast journalism experience. Contributors on four continents. Experienced two-finger typists who've taught a generation of journos to follow a good story where it leads.

The case of Danny Gans should have been, and should be covered from all its angles. That's how important it is, and as uncomfortable and ad-revenue endangering some of those angles may be, those are the angles that manage to be covered up as time passes.

Was Danny Gans murdered in his bed? We'd not pose that question, but thanks to the wait-and-see attitude of the Las Vegas media, that story is floating around the Internet as we type.

Will the toxicological report close the book on the Danny Gans case?

Probably not, no matter what is revealed, because the ones who should be on the front line of finding  the truth are content to wait for an official report from a controversial coroner's office.  It's these paid professionals, sitting around their news meetings debating whether a story's worthy of coverage, who've allowed the story to spin out of control.

A Review-Journal reporter said it himself when he wrote the lede to yesterday's coroner story that was copied somewhat inaccurately by every news station in town:

"The mystery of Danny Gans' death remains almost two weeks after he died in his home, leaving rumors to fill the information void."

Steve Friess confessed to it in his column today.


* The "Wayne Newton" reference, never made public, was part of a tip emailed to TabloidBaby.com offices. Friess' inclusion of it indicates that he was part of a deliberate effort to mislead journalists investigating the Gans story.
(Comp queen Steve Friess threatens us every time we post his picture, so we're forced to used fascimiles. Help us get it right by sending us a nice photo of Steve Friess today!)
Posted by tabloidbaby at 5/15/2009 11:18:00 AM