EXCLUSIVE: That "never-seen footage of an alien" is apparently the same inconclusive video that was broadcast on national television ten years ago! 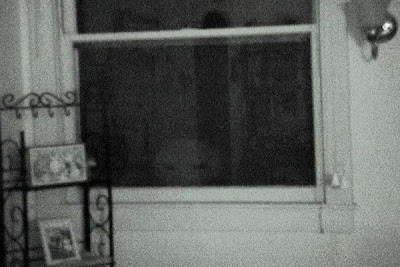 Based on the image that was released today in the Rocky Mountain News, The promise of a new, never-seen videotape showing an actual extraterrestrial life form that was hyped on The Drudge Report appears to be a ten-year-old videotape that was broadcast on national television on November 24, 1997 on the television series Strange Universe.

"It's the alien in the window, mate!" exclaimed Wayne Darwen (right), the respected veteran producer for TV's Extra! who was managing editor and lead writer of the controversial late-night series. "I remember that story. It was the family who had the videocamera running and suddenly a face pops up int he window for a second. We examined it in a hundred ways-- we had a panel of experts study it. In the end, it was inconclusive.

"Anyone who is waiting for this video expecting to see a walking talking breathing E-T will be sorely disappointed!"

Burt Kearns, the former executive producer of Strange Universe, confirms that the still appears to be from the "Alien in The Window" episode of the show. "Scott Lasky was the reporter."

Jeff Peckman of Denver claims to have video of a living extraterrestrial, but tells the Rocky Mountain News he's not showing it because he wants to save it for his movie: "No one will be allowed to film the segment with the extraterrestrial because there is an agreement in place limiting that kind of exposure during negotiations for the documentary."

The image above is supposedly a still from the video, showing the little visitor peeking into a window.

It looks like the same footage that got a half-hour presentation on Strange Universe.