Yes, there’s a big scandal breaking with the New York Post’s Page Six, as its editor Richard Johnson ships out to get married.

Page Six will be thirty years old in January 2007. So now's as good a time as any to remind ourselves of its place in tabloid history and popular culture, and to remember our great departed brother, Neal Travis, who helped give birth to Page Six and fed it through its Wonder Years.

We don't know Jared Paul Stern, who's accused of trying to extort a billionaire in exchange for nice stories, but we've been seen on Page Six, we've been seen with the team, and we won't kick 'em when they're down--or at least seem to be.

It was "Page Six” that broke the news in 1983 that the city's cultural-affairs commissioner, Bess Myerson, had hired Sukhreet Gabel, daughter of the judge who happened to be presiding over the divorce trial of Myerson's boyfriend, Andy Capasso-an incident that would eventually make its way into the national press. And people are still talking about the column's coverage of the public sexual favor that former New Line production chief Mike De Luca received at the 1998 William Morris pre-Oscar party. More recent "Page Six" scoops have included Donatella Versace's rehab stint and Spears's engagement to Kevin Federline.

Mostly, though, "Page Six" serves to provide a daily, pointillist portrait of an increasingly ephemeral culture. The Page's hallmarks are alliteration ("portly pepperpot"), memorable word choice ("canoodling," "bloviator"), an unswerving adherence to the creed that conflict is good for business, and the regular reward and punishment of the latest bad boys and "It girls" seeking the limelight. The exploits of 80s "Deb of the Decade" Cornelia Guest and actor Mickey Rourke have receded, only to be replaced in good time by the adventures of socialite-actress Paris Hilton, actress-dipsomaniac Tara Reid, and current "self-described It boy" Fabian Basabe, whose manhood was recently mocked on the Page after he was pantsed at a party.

Those who have felt the sting of the Page-- or complained that they've been steamrolled by an editor or reporter who carried a grudge-- don't always see what's so entertaining about the column. And there are those who contend that "Page Six" has become as fervently right-wing as the rest of the paper. But when it's doing what it does best-lampooning pomposity and ostentation and sticking it to lying publicists--"Page Six" provides a caffeinated kick the city has come to depend on. It's difficult to imagine how the New York Post would survive without it. 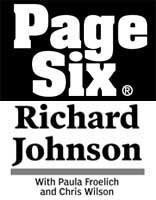 "Page Six"'s DNA can be traced directly back to the man who introduced Australian Rules tabloid journalism to America's genteel Fourth Estate in the mid-70s. The story begins in the days of hot-metal type and IBM Selectrics, when Rupert Murdoch, the driven Melbourne-born media baron… whose assets then included The Australian and the London Sun as well as "the Murdoch mafia"-- a band of hard-drinking, fiercely loyal newspapermen who would follow their stern-faced leader anywhere-- hired James Brady in 1974 to serve as the editor of the National Star (known today as the Star), the supermarket tabloid Murdoch started as part of his initial foray into American media… And when Murdoch bought an ailing liberal tabloid, the New York Post, in 1976, he put Brady in charge of developing a feature that would herald the paper's new ownership and direction: a gossip column.

Murdoch, according to James Brady, wanted the Post's new gossip page fashioned after "William Hickey," a gossip column that ran from 1933 to 1987 in London's Daily Express newspaper. Named after an 18th-century Irish rake, who, as penance, chronicled his drunken, scandalous life in a memoir, the column was written and edited by a changing cast of characters that once included the well-known British gossip Nigel Dempster. The Post's new column would work on a similar premise: a group of reporters would gather and write up brief, pithy stories about the powerful and famous and file them to the column's editor, who would imbue them with a unifying voice and plug them into a modular format…

By the time Murdoch actually began publishing the paper, Brady says, he himself had already been tapped by his boss to head his newest acquisition: New York magazine. Editorship of "Page Six" then fell to the natty, elfin Neal Travis, a New Zealand-born product of the Australian tabloid scene. His recruits included a young Post reporter named Anna Quindlen, who already had one foot in the door of The New York Times.

Remarkably, since Travis himself departed "Page Six" in 1978, only a handful of editors have presided over the column for any length of time. Claudia Cohen succeeded Travis, and when she left, in 1980, Brady returned for a two-and-a-half-year stint. Up next was Susan Mulcahy, who wrote a book about her experience, My Lips Are Sealed. She was followed, in late 1985, by Richard Johnson, who is the current editor of "Page Six" and the column's iron man, having held the top byline for more than half of its 28-year existence. There have been a few notable cameos too, including longtime Post columnist and former A Current Affair personality Steve "Street Dog" Dunleavy. And, surprisingly, given the disdain that was once heaped upon the profession, a number of people who worked for the Page have been Ivy League graduates...
Posted by tabloidbaby at 4/07/2006 03:40:00 PM